Spain Beats Iran with 1-0 in World Cup Group B

SportsEuropeIran
By John Bridge On Jun 21, 2018 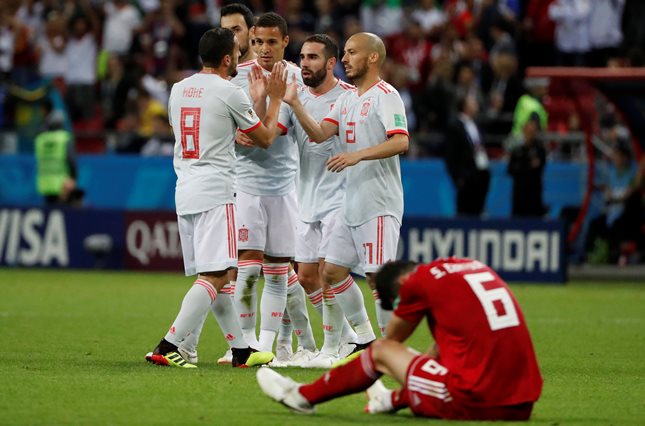 Spain besieged the target of Iran as expected, but the Asians defended with the knife between the teeth, and the Spaniards found it difficult to open. Silva then tried on a free kick, and keeper Beiranvand brought a save. ‘La Roja’ found no hole in the hostile defense. The Iranians battled for every meter, and they also took out all the tricks – endless injuries – to get the pace out of the race. Silva came close to rest, but his bang was blocked and flew by.

Even in the second half, Spain surrounded the goal of Iran. Piqué saw his header swept off the line, and Beiranvand saved a spectacular shot of Busquet’s with one hand. When Iran finally came out, it was almost price, but Ansarifard kicked in the side net.

Spain came ahead, luckily. Defender Rezaeian, active at Oostende, kicked the ball unhappily against the knee of Diego Costa (54.), after which the leather disappeared into the goal. Iran responded immediately. Ezatolahi thought to score the tying run, but the VAR rejected his goal for offside. After a corner, Spain almost came to 2-0, but the ball did not go in the shot.

As long as it remained 1-0, the Spaniards had to pay attention. Taremi came close to an unexpected equalizer but headed hard. Iran was through its best forces, and could no longer threaten the Spanish defense.

Earlier in the day, Portugal beat Morocco 1-0 after Cristiano Ronaldo’s fourth goal. The Lions of the Atlas were eliminated after two defeats in Russia. On the third match day (25/06), Iran plays against Portugal, and Spain hits Morocco. Portugal and Spain led the group with four points, for Iran with three points.

KLM Gets Even More Competition on Route to Dubai